You guys are in luck, I went out to hear music last night, so I have something to listen to. I went to see, The Whiskey Charmers at Rockwood Music Hall Stage 3. The timing worked out oddly, I wanted to do some food shopping first but I left a little late and then the D train ran local, so I skipped shopping and got to Rockwood a minute before they went downstairs to do soundcheck. I walked in, put in eye drops, my life is all about the eye drops for 5 weeks, and almost immediately I heard, “Look whose here?” Carrie and Lawrence stepped out of the shadows and I could see them. I always thought the problem seeing at Rockwood was mainly my eyes, but nope, it’s just damn dark. As I was doing the merch I went down to sound check with them. got the merch and my instructions, and then went upstairs to set up shop.

When I opened the merch case I discovered the Whiskey Charmer’s Entourage. 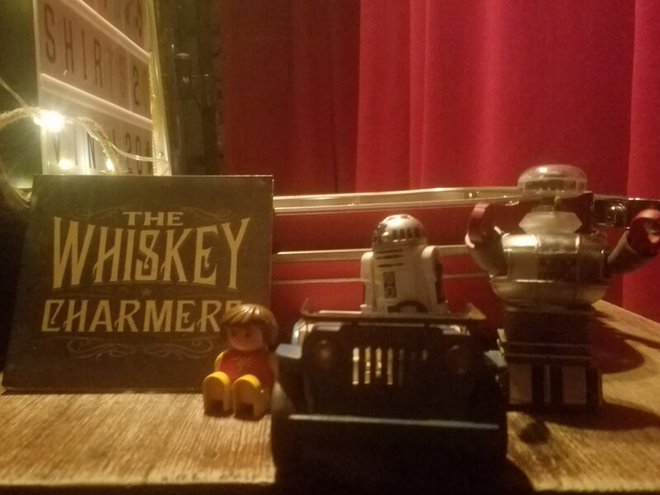 This should be enough to make you check out the band. It doesn’t prove they are good but it proves that you’ll want them to be good. They are in my karass.

That creates a dilemma. I want them to be good. I remember them being good. But are they really good or is it just that they are my people. You know that me saying that, it means they are good. If they weren’t I would not bring it up. I discovered that as soon as they started playing. They were was good as I remembered. I had only seen them twice before and that was over about two years.

I then spent half the show trying to figure out what they do special? They don’t fit into the slots most of my favorites do. I never figured out technically what they do, but I know the effect it creates. When they sing about something, they make you care about it. It becomes important. They succeed at artists, they make you feel what they feel. As they said about Conrad Birdie, “When he sings about a tree, you really feel the tree.”

Carrie writes the songs, sings, and plays rhythm acoustic guitar, Lawrence plays lead electric guitar. There is no wasted motion. Lawrence isn’t up there to display his guitar skills and Carrie isn’t there to show off her voice. Everything they do is in service of the song. Everything comes across as sincere. Lawrence’s playing perfectly compliments Carrie’s singing. The artist they most evoke to me is Lucinda Williams. Carrie’s voice isn’t particularly like Lucinda’s but her approach to singing is. I was delighted when I found out that they are big fans of her. 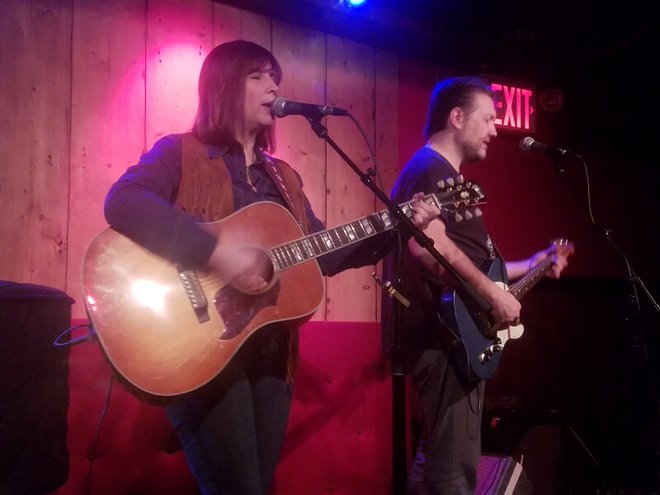 If you’ve seen their Instagram you’ll know that it’s largely devoted to Carrie’s boots so here they are. 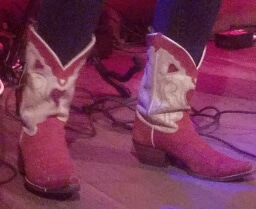 I think they should cover Janis Ian’s Boots Like Emmylou.

I haven’t discussed genre yet; blues mixed with country, and rock. The balance of the three changes from song to song. It’s music you’d hear over a dialogue free scene with dark characters revaluating their lives in a dark bar. If you are a TV or movie producer run through the Whiskey Charmers catalogue and you’ll find gold.

After the show we went to my usual, Rosario’s pizza down the block. I realized that when going out with out-of-towners it’s a natural. It’s a no-nonsense neighborhood pizza place. It fits the criteria we used as kids. It looks like a dive and the people working their speak like they just came off the boat from Italy. They make my favorite pizza. I usually eat it alone, so it was great to share it with two friends that I have hardly spent time with. We are still in the exciting getting to know you phase. We shared Dad Jokes. Carrie is the rare mom who tells them too. She’s cool, not bound by society’s gender expectations.

Why can’t you starve in the desert?
Because of all the sand which is there.

Sadly I had to leave and make my way back to the Bronx. I did that just in time. On the ride home my cough and cold acted up again. It was too late to buy real meds but I got cough drops at the bodega on my block. This led to another bad night’s sleep. I wanted to go out tonight to see Karen Dahlstrom tonight; I haven’t seen her solo in ages. But I don’t want a repeat of last night. Discretion is the better part of valor. I’ll stay in. I was feeling fine most of the day yesterday. I hope I didn’t get Lawrence and Carrie sick. If I did I’m sorry. I should probably get myself out of the house soon to get to the drug store. I need some dextromethorphan to sleep through the night.

One thought on “I Must Be Whiskey, I was Charmed”